Alpha Patch 3.0.0 has been released to all Star Citizen backers. This update contains one of our largest feature sets to date – including the three moons of Crusader, a new mission system, improved shopping and cargo mechanics, and increased our server player count from twenty-four to fifty players. Alpha 3.0.0 is also the first implementation of a lot system changes that go on in the background. For example, with commodity trading, we’re testing out the very first iteration of the dynamic economy that will control the marketplace of the universe.

With our new procedural planet tech, there was a strong need to make sure that we efficiently update all the entities and components in our game world (their number increased significantly compared to 2.6.3). We therefore implemented a new update scheduler that allows us to efficiently batch update them per type and update strategy (range based, manual, always, conditionally). As this puts more strain onto our job system, we further refined its core to allow for even lower latency scheduling and supported even more CPU cores.

In short, it’s a big update that lays the foundation for larger developments down the road.

Apart from the improvements already made, there’s still a lot of work that has to be done to get the performance up to where we want it to be, but this will take a bit more time. Object Container Streaming and Entity streaming are major aspects to reduce memory footprint and further scale the game world for many star systems in a seamless way. There will also be a concentrated effort into better scaling of existing game systems with increased player count and world complexity (entity count). We’ve been investigating range based culling of entity updates which will provide significant gains, but still needs additional work to properly integrate into all game systems.

With the release of 3.0.0, the Persistent Universe is now shifting to a quarter-based release schedule. This approach means that after each live delivery we can return to the main development branch and pick up all the changes and optimizations that have been worked on in the background and ready them for our next live release. 3.0 has been about completely revamping systems and gameplay as well as adding new content. We will now go back into our development branch, which we need to do for our Q1 release in March and will pick up the latest code and concentrate on optimizing performance, using our new gameplay and systems to the fullest, as well as continuing with the balance and polish of the PU.

Your feedback and engagement is what makes Star Citizen special, so drop into the ’verse, grab your ship and explore the vastness of 3.0.0.

The maverick ship manufacturer has done it again.

“Humanity’s frontier isn’t just some place one world over. It’s a dream. It’s an idea waiting to be had. It’s what motivates us to push harder and farther. It’s the spirit built into the very heart of the Pioneer.” – Silas Koerner Ever since the unveiling of the quantum drive, Humanity has been on an upward trajectory of innovation and exploration. Advances in technology have allowed more and more people to sail the stars, to discover previously unknown solar systems, to harvest resources from celestial bodies. Now Consolidated Outland offers another advance in Humanity’s technological evolution. Introducing the first mobile construction yard, the Pioneer opens up exciting opportunities for planetary settlement by allowing you to create your own modular structures. So you can bring civilization to the wild.

This week, the team generated another fifteen builds for the developers and QA to review, while three more made their way to the Evocati testers. One of the major victories this week was the first implementation of our new WAF build system, which will cut down the required time to generate a build from four hours to just one. When perfected, this will allow us to have more development and testing time between each build.

The team continued to focus on perfecting the Shopping experience this week, finally fixing a bug that prevented players from equipping items that they bought. Our daily review sessions focused on the physical stores in locations like Port Olisar, Grim HEX, and Levski, so we’re in the process of prioritizing those bugs in our overall fix-list. The rest of the team continued to tackle the ongoing bugs tied to commodity shopping that we discussed last week. One of the setbacks we encountered this week was a pair of Disconnection errors that would kick players from the servers. These bugs were discovered thanks to improvements made to increase server stability. As players could play for longer, they were now able to trigger these Disconnection errors. Finally, our Network team checked in a fix that will increase performance in the overall game experience.

We are continuing to improve the production schedule report to accommodate your feedback and next week we will have a revised format that highlights the remaining features that need completing before we go to a wider PTU and then live.

The team’s been focusing on the comprehensive Shopping experience and resolving any issues related to shopping, kiosks or the economy. They’ve fixed a series of issues that ranged from spawning the player inside their bed (literally) to one bug that took out all of the items from all of the shops.

The Polaris is a nimble corvette-class capital ship that packs a powerful punch with a full armament of turrets and torpedoes. Intended for use as both a naval patrol ship and to serve as the flagship of militia operations, Polaris has the capacity to perform search and rescue operations, light strike missions and general security patrols. The Polaris includes the facilities to repair, rearm and refuel a single fighter, light bomber or support ship. 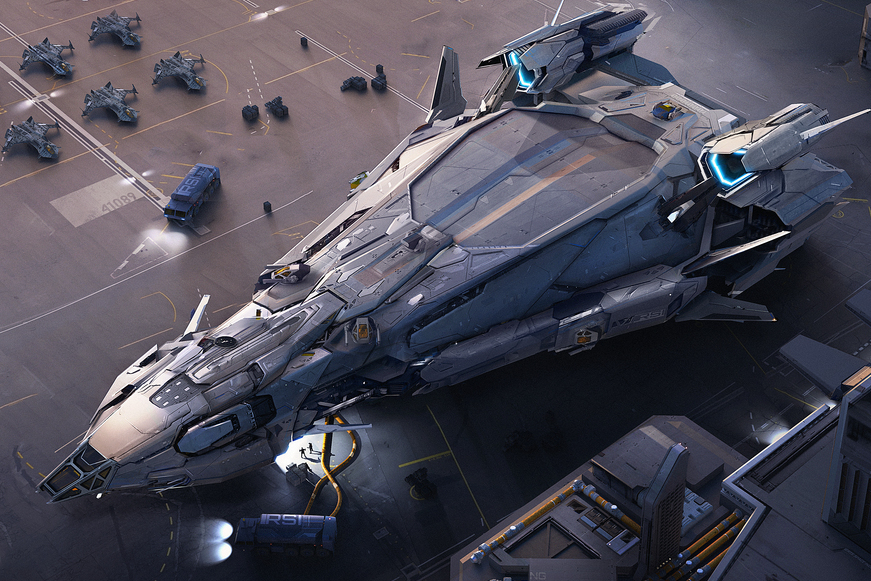 If I wanted to use the Polaris to haul cargo, can I use the hangar bay for that? What about swapping out the torpedoes for additional cargo space? If so, how much cargo do you anticipate can fit using all the space available to me?

The torpedo bay is non-modular, and will not be replaceable, as the ships main purpose is to bring firepower. Strictly speaking, you can put whatever you want inside the hangar bay as long as you can make it fit, but the issue you may run into is the lack of cargo plates, like the ones found in the cargo hold, that allow you to attach your haul to the ship. You may find that cargo floating away when the hangar doors open in zero G. While we may investigate after-market options to prevent this from happening in the future, there are no plans to do so at this time.

There are no plans to include an Argo at present.

What do you mean when you refer to the Polaris as being “versatile?”

The Polaris will be versatile in the way you will be able to use it for things such as Strike Missions, Search and Rescue, and general patrol. But in addition to this, Cargo facilities will allow movement of haulage and the hangar essentially will allow you to carry a range of different smaller ships to areas outside of their usual reach.

Since the Polaris is intended to be a “self-sustaining combat platform” and “capable of extended deployment without resupply” does it have a medical facility or Captain’s quarters?

I can confirm that both a captains quarters (and secondary quarters for the fighter pilot or second in command) and also a small medical bay are indeed present on the Polaris. In addition to this, the Polaris has capacity for a large stockpile of 24 Torpedoes, as well as another 4 ready loaded for launching.

What makes the Polaris more than, “just a better Retaliator?”

The ability to have another ship in its hangar is the obvious one, plus support for a whole crew. Along with the ability to carry cargo without the need of a module, essentially meaning you do not lose any existing features for it. Other than the engineering post of the Retaliator, it only supports the pilot and a few gunners, the Polaris can let a whole strike team work together at maximum efficiency. Generally speaking, it fills a similar role, but on a much larger scale, and carries with it the presence of a capital ship as well as extra facilities that support the diverse skill-set of its crew which goes beyond piloting, gunnery, and the firing of torpedoes. The cargo hold can be used for mission-related supplies such as spacesuits, ammunition, repair supplies, medical equipment, and other things that make a sustained, more self-sufficient deployment possible without compromising its offensive capability, as well as prepare the Polaris for a broader range of contingencies than only torpedo delivery.

How modular is the ship? Can the torpedo, hangar, and cargo bays be replaced? If so, with what?

There are no plans for these large, internal spaces to be modular. We expect the Polaris to have the same customization options found in most ships utilizing the component system.

What can you tell us about the cockpit view? It appears to be obstructed in much the same manner as the Constellation. What is the reasoning for this?

The Cockpit glass is essentially a callback to other RSI ships, basically a signature style. While the struts are present, the overall size of the glass coverage will allow great wide angle views for the bridge and turret crews.

Does the Polaris carry any fixed weaponry? There is conflicting data between the ship page, the matrix, and the brochure about how many turrets are manned and unmanned, fixed hardpoints, etc.

The current planned weaponry loadout for the Polaris is 4x S10 torpedo launch tubes, 6x Manned Turrets, 1x Remote Operated Turret on the Nose (controlled from the bridge) and 1x Automated Lower Rear turret. Apologies for any confusion, if there are discrepancies on the site we will adjust them.

Could we fully repair and refill any ship that fits inside the hangar bay?

Refill and restocking will be an option, and some degree of repair is possible; the hangar has enough room for technicians and repairmen to walk around the ship and use portable repair tools and onboard supplies to repair damage to a greater degree than a lone mechanic on location in the field, but it’s not quite the same as a Crucible’s fully equipped workshop. You should be able to perform patch jobs and repairs, but if the ship comes back really wrecked, you’ll want a find a proper repair bay or Crucible for a full repair.

Will Polaris have any other rooms not shown on layout?

Rooms not listed in the brochure include an armoury, med bay, brig, Captains Quarters and secondary quarters for the fighter pilot or second in command.

We have a few new members:
Sould_Steal, StellarKane, Ronnin, Ioan and Specrte !! Welcome Aboard guys. There will be a few updates on the page and special in the forum in the next weeks. Ioan one of our new guys started to create new banners and logos for the team.

Here you can see a few examples of his great work. When you want to see more "click here"